The day the Tucson school board voted to kill the Mexican American Studies program, I was in Silwan, a neighborhood in East Jerusalem, learning about a different fight to rewrite history.

Jawad Siyam is the director of Silwan’s Wadi Hilweh Information Center. Silwan, he explained to my partner Karen, my daughter Ericka, and me, has a history that stretches back to the time of the Canaanites. More recently, it was for many centuries thriving Palestinian farmland, a main source of food for the city of Jerusalem. Currently the history and the future of Silwan are under siege: Israel has given total power to a private company, Elad Association, which has been systematically demolishing the neighborhood and building an archeological park instead.

In the face of that threat, the people of Silwan have joined together to create the information center, a women’s crafts collective that is producing extraordinary needlework and mosaics, a sports field and cultural café, and a playground. 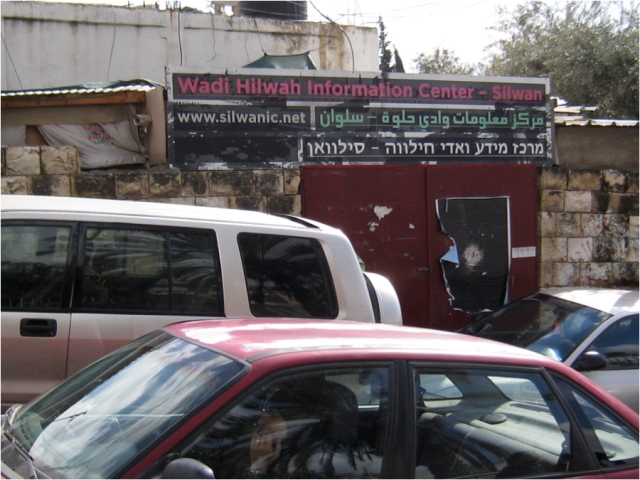 There are two glass cases in the entryway to the information center: one is filled with artwork from the women’s collective, the other with teargas canisters and other ammunition that has been aimed at the center. We watched a video featuring the voices of youth from the neighborhood. Jawad showed us the house next door, which belonged to his grandparents. Now there are a dozen Israeli flags hanging across the front. As we watched, an armored car pulled into the gate. It is illegal to fly a Palestinian flag in East Jerusalem, so the center flies a “We Love Silwan” flag instead. 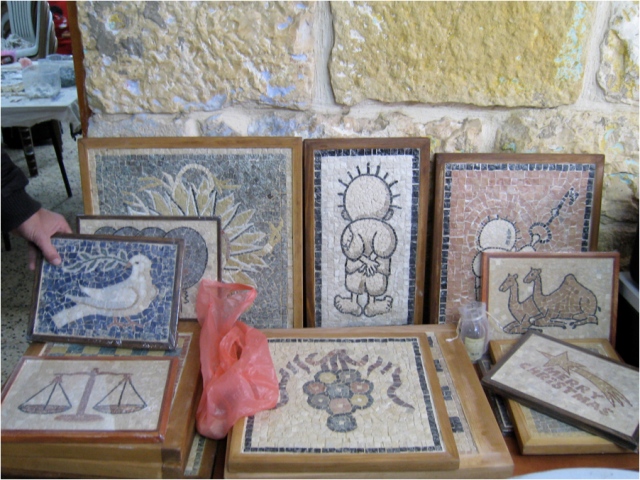 Artwork from the women's collective.

At the crafts collective, the women showed us how to make mosaics and pulled out dozens of examples of the needlework they are working on. At the cultural café, we drank coffee and talked with the staff, all of whom have been political prisoners in Israeli prisons. They told us how many kids from the neighborhood were playing soccer and volleyball on the sports field, and the plans for cultural events at the café. 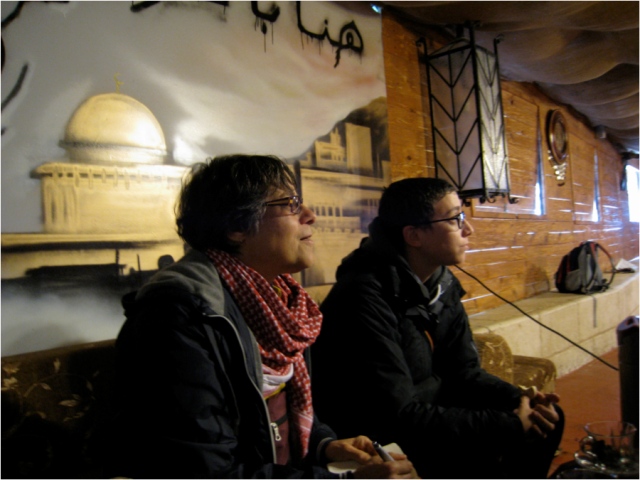 Jody and her daughter Ericka at the Center

We met many amazingly resilient and brilliant people throughout Palestine, but Silwan was special: It seemed so full of hope in a situation that is often filled with losses and desperation. Since we returned to the United States, I have told all my friends, everyone I know, about Silwan.

This morning, one of those friends sent me a URL. “Isn’t this the neighborhood you told me about?” she asked. I opened the link to see a news article from the Israeli newspaper Haaretz: Yesterday the Israeli Nature and Parks Authority bulldozed the cultural café, destroying it completely, and seriously damaged the sports field. “This was the only place in the area to meet,” Jawad lamented, “to sit together. It was the only place for children in Silwan.”

How could this happen? The Israeli government claims that Silwan is the site of the biblical “City of David.” Although this finding is debated by archeologists, the Israelis have built the City of David National Park on the site, destroying dozens of Palestinian homes, a school and a mosque—either through direct demolition, seizure and re-occupation by Israeli settlers, or by digging under the foundations until the buildings collapse.

On Sunday, Feb. 12, the Jerusalem District Planning and Construction Committee approved plans for a visitors compound, vastly expanding the park. By Monday morning, the cultural café was rubble.

Archeology seems like a neutral science. Who, after all, could argue with the importance of understanding the past? But in occupied Palestine, like in Arizona, history and its uses are highly politicized. According to Raphael Greenberg of Tel Aviv University and Emek Shaveh, an organization of progressive Israeli archeologists, “The sanctity of the City of David is newly manufactured, and is a crude amalgam of history, nationalism, and quasi-religious pilgrimage.” Nonetheless, a half million tourists come to the park every year. They watch a 3-D movie that ignores the Palestinian history on the land, and walk down paths surrounded by high walls so they cannot see the Palestinian homes on every side.

Being in Palestine made me think a lot about the United States. In the United States, so much of the history of what came before is long buried. Every once in awhile there is news of a struggle by Native Americans to save a sacred site that is about to become a shopping mall. But in most parts of the United States, the hundreds of years of occupation have erased much of what came before. In Palestine, the fight is much newer, so the foundations of the buildings that have been destroyed are still there—sometimes the whole building or village is still there. And the Palestinians who were forced out of their homes starting in 1948 are still very much determined to return. How does time passing affect our responsibility to right wrongs?

As in Palestine, the determination not to be pushed out, buried, and forgotten is the crux of the matter in Tucson. The Mexican American Studies program is a way of keeping critical history from being erased and buried. “We are still here,” the teachers and the curriculum say. “We are still here, we are proud, our culture is strong. It is something all of us need and can use to build a just future.”

As social justice teachers, we know that justice is the only road to peace. That’s why teaching our students how to think critically about history is so important. And why solidarity is so important. In Tucson and in Palestine.

The Silwan community is determined to rebuild the cultural café by March 21, when Mother’s Day is celebrated in Arab countries. For more information on how to express your solidarity with the people of Silwan, visit the Middle East Children’s Alliance (www.mecaforpeace.org).

Jody Sokolower is the policy and production editor for Rethinking Schools.

Portland to Palestine: A Student-to-Student Project Evokes Empathy and Curiosity, by Ken Gadbow

U.S. students talk directly with Palestinian youth and learn what it is like to live in a war zone.

One thought on “Tucson to Palestine: History As a Weapon”