What was troubling enough as 20th century history is happening in the present time. It is essential that we have discussions about Charlottesville in the classroom. 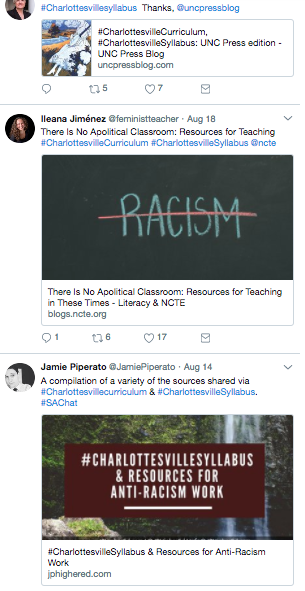 “What should I say about Charlottesville?”

It’s the burning question on every teacher’s mind as the new school year gets underway.

On Twitter, users add lessons and resources to the #CharlottesvilleSyllabus and #CharlottesvilleCurriculum pages; everything from identity charts to readings on the history of white supremacy to conflict resolution activities.

However, what is needed is not just day-after or week-after lessons, but a chance to reexamine what children learn about history — and themselves — all year long. This work needs to begin in elementary school, where students’ ideas about their place in the world are shaped.

“Young children’s minds are like sponges, soaking up the most obscure, profound (and sometimes erroneous!) things imaginable,” Rethinking Schools editors wrote in the introduction to Rethinking Elementary Education.

The Rethinking Schools editors add that for teachers, the challenge is to help young students to acquire the “critical dispositions and questioning” skills that “set the stage to encourage children to act on what they’ve learned — to have ‘civic courage,’ to act as if we live in a democracy.” The editors stress that they do not want to teach students what to think or “how their teachers think their parents should vote.” Rather, they aspire to “create a learning community that models and thinks hard about values of justice and empathy.”

Charlottesville has been a national wake-up call (sadly one of many) as to how important it is to create classrooms that model the justice and empathy values.

Here are some ways to do that in elementary school classrooms:

First and foremost, it is vital that young people have a place to process disturbing news and to be reassured that their lives matter and that they are safe. The images of Nazis and other white supremacists marching with guns and impunity are unnerving for most of us, but can be particularly traumatizing for students of color, Native Americans, Muslims and Jewish students.

What was troubling enough as 20th century history is happening in present time. It is essential that we have discussions (and not just once) about these current events in the classroom, reassuring students that their lives and concerns are front and center. It is also a time for teachers and students to examine the school curriculum and library. Are children of color represented in all aspects of life in the U.S., or only during stories about slavery and Jim Crow? Are Native Americans portrayed in the present tense, or only pre-1900 as is the case with 87 percent of U.S. history standards? Are Muslims represented as foreigners or as part of U.S. dating back to the pre-colonial era? Students can help answer these questions. For example, third graders in San Marcos, California assessed their own school library and took steps to ensure it was more representative.

We must assess our own knowledge and perspective as educators. We cannot teach what we do not know. Most of us were raised reading textbooks that provided a rose-colored, eurocentric narrative of U.S. history. That traditional narrative is reinforced every day. It takes an intentional and consistent effort, particularly for those of us who are white educators, to learn history outside the textbooks and consistently examine (and challenge) our own implicit biases. This is lifelong, daily work.

We must reframe the teaching of U.S. history. In elementary school, students develop a deep-seated understanding of who makes history and their role in it. Yes, the history will be studied in more depth when they are in high school and college. But as young children, they either learn that they are a part of history and have a role in shaping the future, or they learn that history is about “other people” in power. All too often they learn a mythical narrative of “freedom for all” in U.S. history with a few exceptions, instead of a more accurate understanding of a long history of oppression and resistance. Here are three of many examples that can shed a light on events today, for teachers to deepen their own understanding and that of their students.

The era following the Civil War, Reconstruction, gets short shrift in high school and is rarely mentioned at all in elementary. Yet is it our strongest example of democracy and justice in all of U.S. history. Black representatives were elected to state and federal government, public schools were made available (for all children), and many (though tragically only a fraction of) formerly enslaved families were reunited.

The end of Reconstruction also demonstrates the violent lengths white supremacists will take to regain power. There are a few books for upper elementary including The Amazing Age of John Roy Lynch and Crow that offer an age appropriate introduction to this era in history.

One of the most commonly taught stories of social change in U.S. history is about the modern Civil Rights Movement — yet it is often reduced to the master narrative of Rosa Parks sitting down on a bus and Martin Luther King Jr. saying “I have a dream.” Left out are the role of “ordinary” people, the long history of the movement, the role of women and young people, the violence that mirrors the actions of the white supremacists in Charlottesville and much more. Young people can interview grandparents, read stories about people who were their age in the Movement, critique textbooks and explore timelines such as the history of transportation protests that demonstrate that the struggle for civil and human rights began long before the 1950s. These stories show that white supremacy takes many forms – not just flag-waving Nazis. A people’s history of the modern Civil Rights Movement also allows students to gain courage and ideas from the countless, creative stories of resistance.

Key to critical literacy is exploring who tells history, what events are memorialized, and why those choices are made. Howard Zinn explains, “Historians (and journalists) are forced to choose, out of an infinite number of facts, what to present, what to omit. And that decision inevitably reflects, whether consciously or not, the interests of the historian.”

In light of the current news about monuments, students can create a map of the memorialized people and actions in their school, town, or city. Exploring when and why the monuments were erected (or schools were named) would be a rich history lesson. There is a wonderful example from a class in Colorado, where students created artistic commemorative projects based on hidden history. Or students can engage in debate, like a class of first graders on the controversy over the Confederate flag. All of these activities convey the life lesson that history books or news media are not neutral.

James Baldwin’s 1963 essay “A Talk to Teachers” provides wise guidance for approaching students today: “I would teach him [and her] that he doesn’t have to be bound by the expediencies of any given administration, any given policy, any given morality; that he has the right and the necessity to examine everything.”

Our best hope for the future lies with a generation of young people who value humanity, are grounded in an honest understanding of U.S. history, think critically and have the skills and vision to shape a better future. Let’s ensure that our children learn to read, write, and change the world.

Menkart is co-director of the Zinn Education Project and is executive director of Teaching for Change. She is co-editor of Beyond Heroes and Holidays: A Practical Guide to K-12 Multicultural, Anti-Racist Education and Staff Development and Putting the Movement Back into Civil Rights Teaching A Resource Guide for Classrooms and Communities.

This story originally appeared on and was produced by The Hechinger Report, a nonprofit, independent news organization focused on inequality and innovation in education. Sign up for their newsletter.